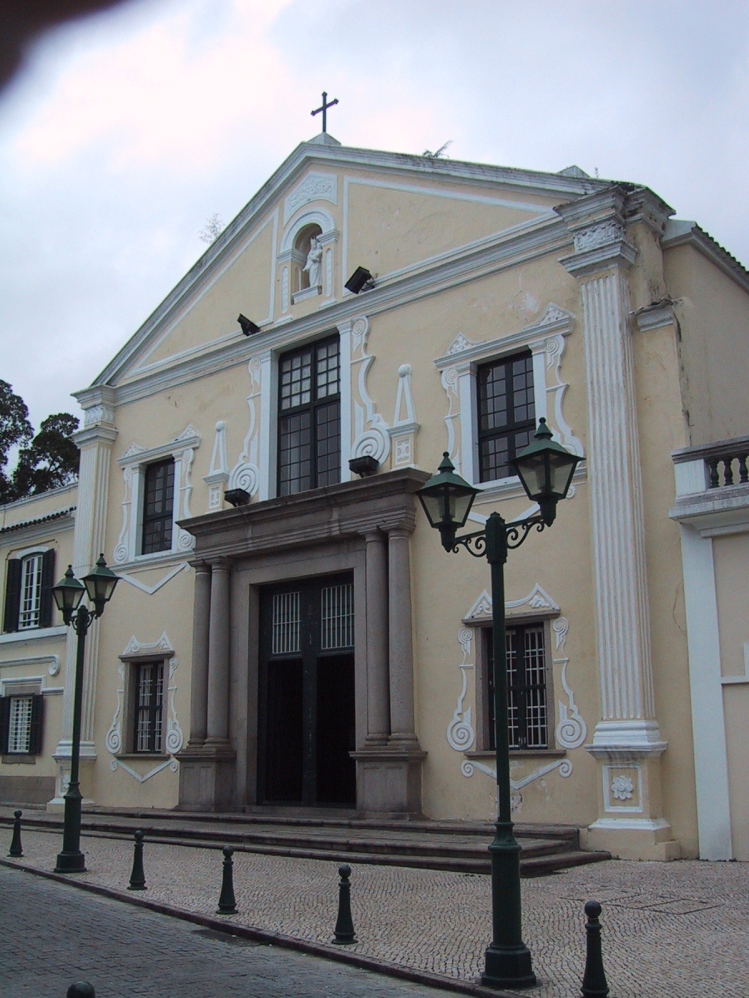 In all my writing I usually have a strong image in my head of the physical setting for the story. Whether that comes over to the reader is not for me to say, but nowhere is it more true than in my Macau short stories. Take for example A Short History of Chinese Tea. The family of my narrator – Lei-Wai – have fallen on somewhat reduced circumstances, I wonder where they lived? Somewhere like this perhaps? Somewhere a little rundown? A house that like the family has seen better times?

When she marries it is into money, so a grander home. Perhaps not quite as grand as this, but the restored Casa do Mandarim gives some idea of the sort of style of house she may have moved to.

At the end of the story she has a tea-shop. The Long Wa Tea House is a famous place for dim sum in Macau and Lei-Wai’s would have been smaller than this, but similar in appearance and style. The perfect setting for mahjong and gossip.

You can see/hear me read A Short History of Chinese Tea courtesy of the Fly on the Wall Press YouTube channel (https://www.youtube.com/watch?v=N_kpe10jGHk&t)  or better still buy my collection The Goddess of Macau coming from Fly on the Wall in August. 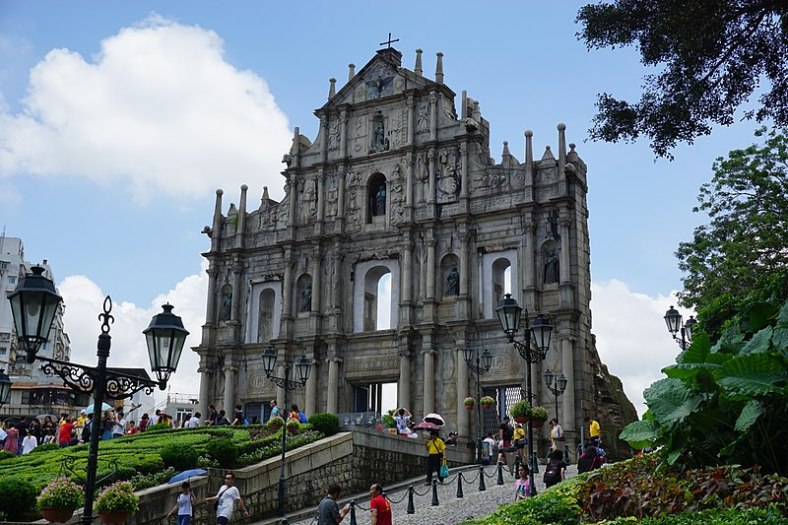 In many ways Macau is symbolised by a building that is not there – the church of São Paulo, built in the early 1600s and for two hundred years one of the largest Catholic churches in Asia, until it was destroyed by fire in 1835.

But not completely destroyed. What remains is the mighty southern stone façade, intricately carved between 1620 and 1627 by Japanese Christians in exile, and it is this very Catholic ruin that remains the most famous landmark in the city, standing as it does at the top of a long flight of steps. All that remains behind the façade are the foundations and the crypt. Bizarrely it always puts me in mind of a film set for a Western; a one horse town with a saloon bar that is nothing more than a wooden front.

When the sixty-eight steps leading up to the façade are not overflowing with tour groups taking selfies, the ruins themselves form a striking image – and perhaps an appropriate one. After all, what is a façade if not something to be projected with nothing to support it, and what is Macau if not a complex reality hiding behind a superficial – if attractive – aspect. The vision of Macau that the tourist board presents is one of entertainment, vacations and good times. The gambling is wholesome and combined with shows from big name stars – Las Vegas eat your heart out – and when you’re tired of the slot machines and baccarat, explore the history and food, shop for Portuguese cakes and biscuits. Join the queue outside Lord Stow’s bakery.

But don’t look behind that façade. Don’t look at the prostitution. Don’t worry about the money-laundering. Don’t talk about the increasing political repression, and the erosion of a Macanese identity in favour of the glorious motherland. Don’t concern yourself with the writers and activists banned from visiting the city.

Have a plate of African chicken and perhaps some garlic prawns, wash it down with a Macau beer, then get back to the casino.

Don’t look to see what lies behind.

Cemeteries are strange things, or rather it is our reaction to them that is often contradictory. The graveyard of an English country church nestled in the heart of the countryside can be a beautiful place, on the other hand I live in a converted church which we would never have bought if the graveyard was part of the garden. Thankfully it is over the road and out of sight. In Hong Kong apartments are cheaper if they overlook a cemetery, while traditional hillside graves are often in the most beautiful locations.

Some have become tourist attractions based on who is interred there. Highgate in London or Père Lachaise in Paris are, of course, the most well-known depending on whether your interest is in radical politics or 1960s music, but the one that speaks the most to me is the Old Protestant Cemetery in Macau. A quiet, peaceful gem in the middle of the city and which started a writing project that for me has become enormously fulfilling.

The cemetery was founded in 1821 to provide a protestant burial ground in Catholic Macau. Next to the cemetery is Casa Garden, a salmon-pink and white building that was the East India Company’s base when Macau was the centre of its China business.

A later addition was the plain, simple white-walled Morrison Chapel.

The result is a haven of peace where the graves and memorials stand in the shade of frangipani trees. Most of those who were buried there were British, American and Dutch sailors and missionaries, but also their families and some of the most tragic are the infants such as Charlotte M Livingstone who died in 1858 aged 5 months and 10 days, and the even younger Charles Hodge who died in 1857 aged 2 months and 6 days. Of course there was nothing unusual in infant death in those days, but there’s something particularly heart-breaking when it occurs so far from home.

At the other end of the scale from small stones to the memory of children are the large, grand memorials such as that to Lord Henry John Spencer Churchill.

The cemetery closed in 1858, by which time most British and Americans had moved to Hong Kong, and gradually fell into disrepair. It wasn’t until the 1950s and 60s that the cemetery was restored and documented primarily through the efforts of the University of Hong Kong Vice-Chancellor Sir Lindsay Ride and his wife Mary. Their book “An East India Company Cemetery” is a testament to their love of the place and to the work they put into bringing the cemetery back to life (as it were). It’s well worth reading if you can get hold of a copy. Lindsay Ride’s own ashes were interred there in 1977.

At a personal level it was thoughts of the cemetery that set me on the course of writing about Macau and realising just how many stories there were to be told about this remarkable city. I am really excited that the fruits of this obsession will be available for all to see in August when Fly on the Wall Press (https://www.flyonthewallpoetry.co.uk/) publish my first short story collection “The Goddess of Macau”. Until then, you can still read my first Macau story (“Sacred to the Memory”), which was directly inspired by the cemetery and this grave stone in particular,  https://www.litro.co.uk/2015/04/sacred-to-the-memory/. 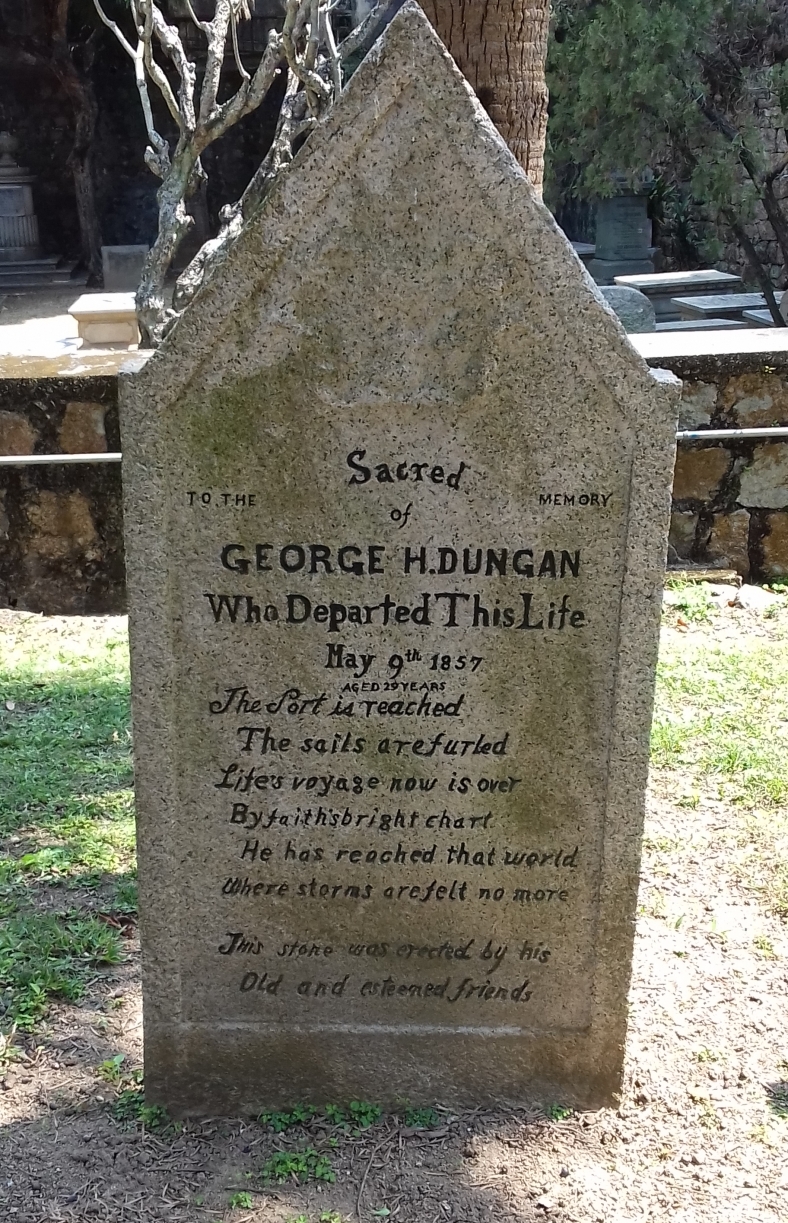